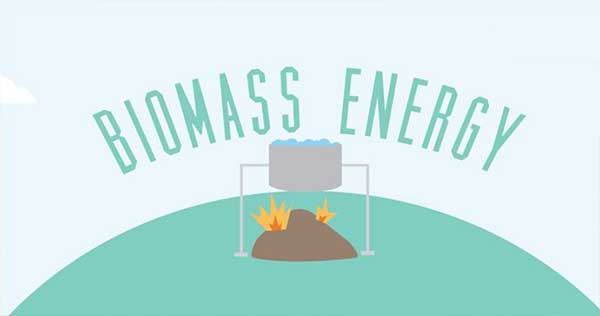 Although its name suggests the opposite, biomass was the first fuel used by mankind. In a generic way, biomass means any mass of renewable living material present in an organism or organisms, including part of inert material, such as hair and feathers of vertebrates or the pulp of trees. All this set has as a common denominator that organic matter comes, directly or indirectly, from the process of photosynthesis, which is why it is presented periodically and not limited in time. Its development is closely linked to agricultural and forestry activities and the waste they produce.

The energy that can be obtained from biomass comes from sunlight, which, thanks to the process of photosynthesis, is used by green plants through chemical reactions in living cells to take carbon dioxide from the air and transform it into organic substances. With this conversion process, solar energy is transformed into chemical energy that accumulates in different organic compounds and is incorporated and transformed by the animal and plant kingdom that, in turn, transforms it through artificial procedures to obtain consumer goods.

The possibilities of energy use of biomass are very different and are closely linked to the possibility of other uses of wood and agricultural waste as raw material, food or recyclable material. The concept of energy biomass includes materials of biological origin that cannot be used for food or industrial purposes. It cannot be ignored that plants and other forms derived from biomass serve man in more ways than as sources of energy, for example as food, medicines, as building materials and, in the case of green plants, as producers of oxygen. The nutritional aspect of biomass is nothing more than an indirect energy use, since humanity and animals transform the energy stored in plants, through metabolic processes, into the vital energy they need. And more than that, since in turn plants are a source of nutrients and vitamins.

In a relatively short time, the generation of urban and industrial waste has increased in such a way that currently its management and treatment is one of the main environmental problems of our society. The energy valuation of the organic part of this waste, combined with selective collection processes, constitutes a clean and effective use option.

Energy crops are a new source of energy

From an energy use point of view, biomass is characterized by having a low carbon content and a high oxygen content and volatile compounds. Volatile compounds, with the presence of carbon dioxide, carbon monoxide and hydrogen, are those that concentrate a large part of the calorific value of biomass. Its calorific value depends a lot on the type of biomass considered and its humidity. This characteristic, together with the low sulfur content, make it an especially attractive product to be used energy.

It is also important to highlight the environmental aspect of biomass. Its energy use does not contribute to increasing the greenhouse effect since the balance of carbon dioxide emissions into the atmosphere is neutral. In effect, the carbon dioxide generated in the combustion of biomass is reabsorbed by photosynthesis in the growth of the plants necessary for its production and, therefore, does not increase the amount of CO2 present in the atmosphere. On the contrary, in the case of fossil fuels, the carbon that is released into the atmosphere is the one that has been fixed in the earth for thousands of years.