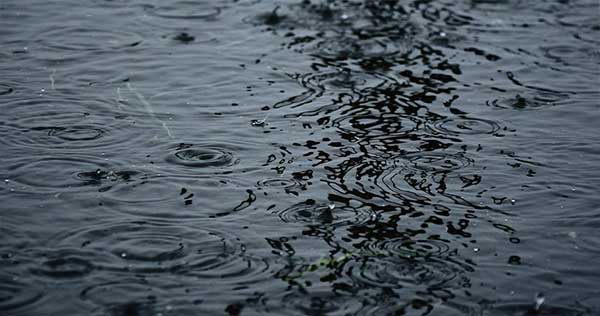 The water found in nature can be found in rivers, seas, basins, and in the form of rain, which is one of the dynamic forms of the “Hydrological Cycle”. Rain is the precipitation of liquid drops of water.

These drops have diameters greater than 0.5 millimeters and can reach about 3 millimeters. Large drops tend to flatten and divide into smaller drops by the rapid fall through the air. On the contrary, the precipitation of minor drops, called drizzle, usually severely limits visibility, but does not usually produce significant accumulations of water.

The amount or volume of water dropped is expressed as the depth of water that is collected on a flat surface, and is measured at a caliber up to 0.25 millimeters.

Air masses acquire moisture by passing over bodies of warm water or on wet earth surfaces. The humidity, or water vapor, is high among the air masses due to turbulence and convection. This transport necessary to cool and condense the steam is the result of several processes, and its study provides a key to understanding the distribution of rainfall in different parts of the world.

The phenomenon of elevation, associated with the convergence of trade winds produces a band of heavy rains near Ecuador. This band, called the intertropical convergence zone, ZCIT, moves south or north according to the seasons.

In higher latitudes, much of the elevation is also associated with mobile cyclones that take the form of humid and hot ascending air over a colder mass of air with an interface called front. The elevation is associated, on a smaller scale, with the convection of air heated by a warm underlying surface that leads to downpours and storms. The most intense rains in short periods of time are usually due to these storms.

The air can also rise when forced to climb over a mountainous barrier, with the result that the slope exposed to the wind, to windward, has more abundant rains than the leeward, on the other side.

The distribution of rainfall is very irregular, showing strong contrasts from one area to another. The annual distribution of rainfall on Earth reflects the influence of the distribution of land and seas and the height of the land. The world’s largest rainfall, about 10,920 mm per year, occurs in Cherrapunji, in northeastern India, where moisture-laden air from the Bay of Bengal is forced to rise over the Khasi hills of the state of Asma; up to 26,466 mm of rain have fallen in a year. Other rainfall records include about 1,168 mm of rain in a day during a typhoon in Baguio, Philippines. 304.8 mm in one hour during a storm in Holt, United States and 62.7mm in 5 minutes in Portobelo, Panama. In Spain, the highest rainfall is recorded in Galicia, Cantabrian cornice and Serranía de Ronda.

Despite the presence of moisture and ascension, sometimes the clouds do not produce precipitation. This circumstance has stimulated the study of precipitation processes, specifically how a raindrop is formed from about one million tiny droplets inside the clouds. There are two different processes of precipitation: the evaporation of water droplets at temperatures below freezing in small ice crystals that later fall to warmer layers and melt, and the union of small droplets into larger droplets that fall at speeds superior.

Efforts to effect or stimulate these processes artificially have led to extensive time modification operations over the past 20 years. These efforts have had limited success, since the regions with the greatest rainfall deficiencies are dominated by air masses without adequate humidity or height. However, some promising results have been obtained and new methods of artificial rain are actively investigated. The influence of the relief is decisive in the distribution of rains, and with a peninsular periphery closed on all sides except for the west, the rains find an almost invincible obstacle to penetrate the interior and the Levantine region.