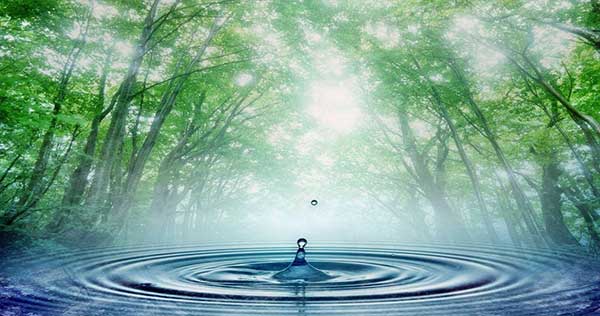 The water covers three quarters of the Earth’s surface, distributed among the oceans, the atmosphere, polar ice caps and inland waters. Water plays a fundamental role as an engine of biological activity on our planet. This is evidenced by the fact that life has begun thanks to water. As different life forms evolved, they became more complex and specialized.

A large part of the zoological species abandoned the water to move on to the earth, incorporating the water as a part of their own organism.The water serves to dissolve the mineral salts necessary for living beings, while keeping the organic substances of the cells, thus making it possible for vital reactions to occur in the development of life.

It is responsible for maintaining the temperature of the human body by lowering it by perspiration of the skin, sweat, to compensate for a high outside temperature or the excess heat produced by our body. Our body uses water as a means of transport and storage of nutritional substances, or as a means of evacuation of the elements to be eliminated.-In order to maintain the appropriate level of water, a person has to return to his body about two liters of water daily, which are lost through urine, breathing, perspiration, sweat and fecal matter. In short, water is not only the important life support we know, but it is a basic element for Its survival and development.

Surface waters are an essential component of the water cycle in the troposphere. These constitute a means in which natural resources undergo the physical, chemical and biological processes that govern their physical evolution.

Water in the biosphere transports matter and energy, supports the development of life, is an essential and major component of living matter and is part of inert matter in varying proportions. Through the transport of dissolved substances and the entrainment of materials, water participates in geological processes and in the body’s circulation of nutrients and waste.

Through energy transport, water also contributes to the planetary and regional thermal regulation manifested by the variation of the seasons. Its transport and drag capacity gives it a decisive role in the state and evolution of terrestrial and aquatic ecosystems, especially in the case of surface waters, because of the remarkable flows they normally register.

From a quantitative point of view, surface waters are a component of the so-called hydrological cycle. It develops in three stages in which the seawater enters the atmosphere by evaporation, where it condenses and subsequently precipitates on the surface of the earth. From this, through runoff, superficial or underground, it will reach the sea to be evaporated again, thus restarting the cycle.

The three key phases in the hydrological cycle are:

It takes place on the surface of the sea, especially in warm areas. This water in the form of gas, steam, enters the atmosphere causing the formation of clouds that will be responsible for the precipitation. The factors that affect the rate of evaporation are the rapidity with which heat is provided to a liquid, the agitation to which it is subjected to bring liquid to the surface and have enough energy to escape and the speed at which renews the vapor that is above the liquid. On the other hand we have the evapotranspiration of living beings, mainly the large forest masses, which also provide water vapor to the atmosphere. Perspiration is the process by which water is absorbed by the roots, transported through their bodies and evaporated on the surfaces of the plant, especially the leaves, into the surrounding air. The energy required to convert liquid water into water vapor ultimately comes from the Sun through various sources. The energy of evapotranspiration can come from heat transfer, either from the hot air to the cold plant or to the ground surface; But the main source of energy is net radiation. Generally, the volume of evapotranspiration will be less than or equal to that of precipitation that falls in a region. Exceptions are given when precipitation is complemented by irrigation or in cases where plant roots can obtain water from the water table when it is one or two meters from the ground surface.

The steam-laden air rises to the cold layers of the atmosphere, at 20ºC and 30ºC below zero, where the condensation effect will occur. Small ice crystals, very cold water drops, and water vapor will appear. Under these circumstances, a process of agglomeration of ice crystals is created that increases its size and is heavier. When they reach a certain proportion, they part with the cloud forming snowflakes. These flakes, due to gravity, cross the atmospheric layers until they reach a temperature above 0ºC. Then a phase change occurs and they pass from solid to liquid, becoming rain. In the lower layers of the atmosphere the fine drops of water that remain in suspension in the air collide with each other forming, in its descent, larger drops that subsequently precipitate. Rain, snow or ice can fall evenly or in showers. Uniform precipitation can be intermittent, although without sudden increases in intensity. Hail and granulated snow only occur in showers; drizzle and ice crystals are continuous and uniform rainfall. It should be noted that, if in the passage of the liquid phase to the gas the water is released from the impurities it contains, when it falls to the ground in the form of rain, it dissolves the substances present in the atmosphere as well as those of the earth’s crust and from the subsoil until reaching the sea. In some cases the water emerges back to the surface in the form of springs or fountains.

Precipitation on the earth’s surface will follow different paths before returning to the beginning of the cycle. A part of the water will be used by living beings, vegetables and animals. Another part goes to the sea through surface runoff, which can pass through beds formed over time such as rivers or torrents. On this road to the sea there is a leak into the subsoil forming underground runoff. Water can be stored on the surface, lakes or surface reservoirs, and in the subsoil in underground aquifers. It should be noted that this entire runoff, infiltration and storage system is completely interactive since there is normally a continuous flow between all systems. For this reason there are rivers that disappear, forming underground rivers, and reappear kilometers later. Similarly, the interaction between aquifers and the sea can cause marine intrusion, penetration of seawater into aquifers. In the same way as with energy, the total amount of water that exists in nature can be considered to have a constant value. What changes is its form but not its quantity.